Duluthian Bert Enger, of Enger and Olson Furniture Company, along with his partner Marie Olson, purchased the ship from Captain Folgero and crew soon after the voyage, and he donated the Leif Erikson to the City of Duluth. The ship was placed on display in Duluth’s Lake Park, which was later re-named Leif Erikson Park around 1929. There the Leif Erikson steadily deteriorated after years of neglect and vandalism.  The state of the ship reached a low point in 1980, prompting a former Duluth City Councilor to suggest that the Leif Erikson be burned in the traditional Viking manner of putting a ship to rest. This suggestion inspired Marie Olson’s grandson, Will Borg, to contact his boyhood friend, Neill Atkins, who was also serving on the City Council at that time to help form a restoration committee.
Neill and Will brought together a diverse collection of volunteer workers to begin fundraising efforts to restore the ship to its original condition.  Fundraising activities began in 1985. Since that year, the Restoration Project has raised over $100,000 through a number of ways. For over 10 years, dedicated volunteers have solicited donations from corporations and individuals, sold souvenirs, food and beer at public events concessions and organized 10 annual Viking Ship Festivals.  The Viking Fests were a one-day event featuring Scandinavian food, arts, crafts, and entertainment to help raise funds, the last of which was held in 1996.

Boat builders began the actual rebuilding of the ship in 1991. Most of the restoration has been completed, and the ship was moved to the eastern end of the park in 2000. A protective covering of shrink-wrap was placed on the ship now until a roof structure can be raised to protect the ship from
the elements and vandals.

In 2013 the Leif Erikson was moved out of the park to a warehouse at the future site of Pier B Hotel Complex.
Currently, the ship is stored at the former Superwood site on the waterfront in a secure building. 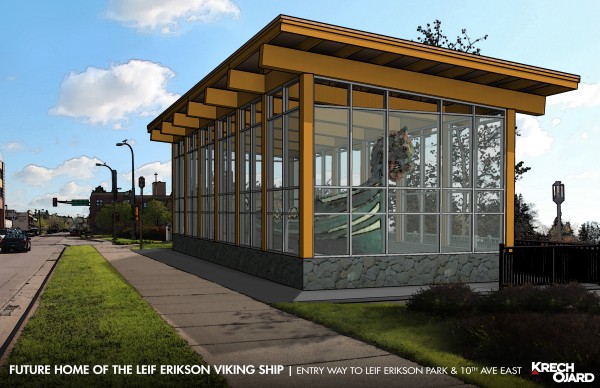 The new secure display building designed by
Krech Ojard & Associates for the Leif Erikson.
After completion the ship could possibly be relocated near Leif Erikson Park
at Superior Street and 10th Avenue East. The project is still in negotiations with the City of Duluth.

Special Thanks to
Krech-Ojard & Associates and Kane Tewes for his time and efforts in designing the new shelter for the Leif Erikson Viking Ship.

We’d like to recognize the following for their participation in the Leif Erikson Project Viking Ship move on July 11, 2013:

“It’s the not seizing upon the jewel the city has in this ship: That’s the frustrating thing.”

Neill Atkins • Co-chairman of Save Our Ship

Something to look forward to

Come check out the Leif Erikson Viking Ship at the Duluth Festival of Sail! The beautiful ship will be on display for all its glory in the hopes of trying to inform the visitors on the story of Leif and why it is so important to keep its history alive!

Contact us to figure out how YOU can be a part of history.